Nice to hear from you Mr. Shourie

Today was the day after so many days of wait, that I finally got to see one of my Idols Mr. Arun Shourie, live on stage, One of the special days of my life. The lecture was good a lot of orientation, though it was a shock to me, I was expecting a high content based session with lots of facts, figures and numbers. i was expecting an economist, a journalist in action. What came was a pleasant surprise (though it was a shock for me, as I always saw Mr. Shourie as an economist, politician and a journalist. This was what I had conceived when I had read his books). It was neither the economist nor the journalist and nor the politician in action. 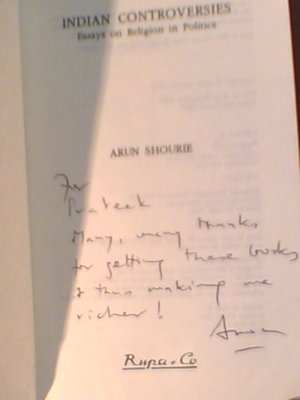 It was the leader Mr. Arun Shourie in action. It was a small talk laden with a vision, a vision to excellence of individuals and their synergies for the country. A vision which he saw for every youth in the country and all he did was to spark the same vision in our hearts, in a profound an elegant manner that every person in the hall was ears to the voice. It was such a pleasure to see and hear Mr. Shourie, his vision and to add salt to the taste was his excellent articulation. I have yet to come across a speaker who is so concerned about his audiences that even when he quotes random verses from ‘Dhampad’ he makes an accurate English translation for his audience. It’s been around 12hrs since I have seen Mr. Shourie, but a thought which is still lingers in my mind, “Just take one public issue, just anyone which concerns you and do something about it.” the thought some how sticks, may be it is too simple to fade away. He came, spoke and went away all he left for the people in the hall was an idea, an answer to the question asked by many of the youths today “How can we make a difference?”
For me the day would imbibe into my life, with an amazing memorabilia. Autograph of Shri Arun Shourie on one of my books. Thanks Shikha, Rahul, Manan, Shweta, Mahima and the I-CIT for helping me get a souvenir for me.

1 comment on “Nice to hear from you Mr. Shourie”