DON, has received a lot of media hype and I was ever since wondering that all this hype might be just an overdone publicity which would destroy the movie more than it would help it. Despite all the hype that had been created the movie got extremely varied response from the critics as well as the audience, people liked it very much, people hated it, and some found it just passé.

I believe that Farhan Akhtar this time again has done a brilliant job while (re)making DON. It has been fashion in the Bollywood directors & producers to pick up the themes and stories from Hollywood flicks or old movies, but it was Farhan Akhtar who introduced the innovative idea of remaking DON, taking cues from the old hit flick and present in his own way. The major problem in doing a thing like this is t 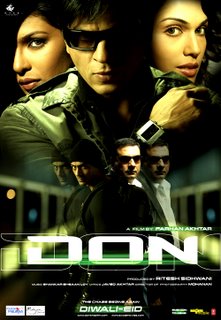 hat u have a benchmark, and that too an objective one, every part, every aspect of your film with a film of all together different time. And no matter what you do there would be few cynics round the corner ranting “Beta, Kuch bhi keh lo, Purani DON ki baat hi kuch aur hai. Yeh bhi koi picture hai”. Not only Akhtar but also Shahrukh Khan has shown great guts by acting in the movie. It is really tough to enact a role type-caste and previously enacted by some one who is perceived to be the epitome in terms of acting in the present industry. It brings out him in a straight comparison with the BIG-B scene by scene, expression by expression. Especially in the songs which are again remixed and where Shankar Ehsaan and Loy have done a great job of reinventing the old music of the Bombay smugglers of 1978 theme to fit International mafia operating in south east of 2006. Though Shahrukh Khan has dominated tried to be very stylish and has grossly overacted and in no way compared to Amitabh Bachan’s acting in the older movie. But he has fitted in the movie and gelled with the character in the movie very well, he seems to be an absolute misfit in the context of 1978 DON but in the 2006 he seems to have a very good catch of the character DON, though he keeps saying “DON ko pakadna mushkil hi nahi namumkin hai”. In the end all I would say is that DON is a worthwhile movie, and kudos to Farhan Akhtar for such a bold experiment.