Gandhigiri has been subject of discussion, in every nook and corner of the country. Lage Raho Munnabhai has revitalized the Gandhian school of thought with a fresh perspective. I have never seen Mahatma Gandhi so visible in India, before this movie except for the currency notes. The real essence of existence of Bapu was not in politics but in his philosophy of life. The movie has brought to the people of this country to understand path for the great Indian dream to evolve. The magi 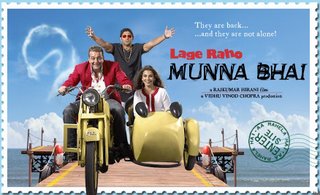 c of the Bapu and his school of thought is so phenomenal that one gets overwhelmed by the wonders that can be achieved by simplicity. It is good to read that people actually in my city are giving roses to the signal skippers. But I feel that there is another important part which people have forgotten and need to be reminded. There is a common thread that links the two Munnabhai flicks together. The thread that we realize and feel in our heart. The thread of humanity, the thread of coexistence. Both of these flicks depict of things common man is forgoing; those basic values, the little pleasures of life. The ‘Satya’, ‘Ahimsa’ ‘Jadoo ki Jhappi’ attributes like these are not unknown to the people. It’s just that he is letting them go in the struggle of life, chasing the larger than life kind of dreams and paying for those dreams in reality. Though Gandhigiri rules through out the movie but I believe a fair amount of credit should also go to this little poem which starts the movie at exactly the right note.