Here on this auspicious kingdom of honor lived a prince,
The place of joy, euphony, and happiness it was where nobody winced,
Not a day, decades but hundreds of centuries ago,
“Prince well be our ruler”, “long live the prince”, the kingdom roared so.

The fate looked sealed but destiny had other things in mind,
Of course the love for her own real son made her blind,
When the queen and the tantrum bind the king with a promise,
14 years of exile for the step son she asked and led to the king’s nemesis.

The prince went to the forest to keep the father’s bind,
Along with brother and wife, leaving the kingdom behind,
The evil demon had his eye on the prince’s wife,
He laid his vicious plans to fly away, leaving the prince in a plight.

The prince gathered an army determined to end the evil,
He crossed the oceans, with his quiver of arrows and sword waiting for the kill,
War was ferocious the evil demon finally fell,
The prince finally won, and there was a tale to tell.

The wife re-united with the prince and the celebrations galore,
The victory of the good over evil was the folklore,
The conquest was done and the years of exile has passed,
The time to return to his kingdom came at last.

The subjects were overjoyed to welcome their victorious prince,
Lights, decoration, and celebration all it was since,
The prince who conquered evil was back to be the king,
In his praise the victory song they sing.

And the Amavsya of the Kartik month was marked as happy one for ages to come by,
The day to be celebrated by rich or poor, extroverts or shy,
Everyone just forgets their troubles and worries,
Just fold their hands in unison to greet every one A Very Happy Diwali!!! 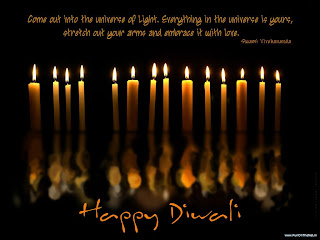 Wishing a very happy and prosperous Diwali to all my readers.
For those not from India, Diwali is a major Indian festival celebrated every year on Amavasya(No Moon Night) of the Kartik month (Indian Calendar)to mark the return of Lord Ram back in Ayodhya after killing the viscious Ravana. Its celebrated all across the country with lights, candles and fireworks. For more details check the wiki link here.