A Rendezvous in Waiting

By PratsJuly 12, 2006Blog, LifestyleBooks, Fun, Politics
It’s been long wait, after the truth behind the teasers was revealed. Sometimes little lines change many things. A poster put on the walls of the institute, made me realized that one of my dreams would be true. I would be one of the lucky people who would get a chance to see and listen to one of most admired personalities by me, Mr. Arun Shourie. Meeting a person of his mettle would be a lifetime experience, one of the most radical thought leaders in the current political and social arena., would be right in front of me in my very own institute. Wouldn’t that be fun!!!! 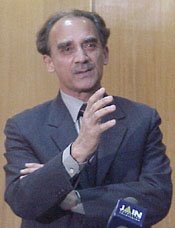 After reading two of his books out of twenty I can say that he is one of the most revolutionary people in the Indian politics, someone who has the guts to stand against the system, say things which are often subdued for the political interest. A person who can give the right perspective about India, a person who can quote excerpts from ‘Vedas’ as comfortably as he can from ‘Quran’ or ‘The Holy Bible’ a true secularist at heart. Someone who has the guts to publish a book on the most sensitive issue of the day like reservations and can state his views so openly as 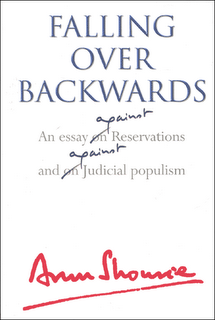 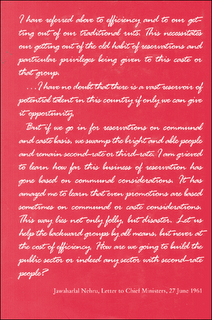 Falling Over Backwards: An essay against Reservations and against Judicial populism by Arun Shourie
How is it that what was explicitly forbidden by the constitution – classification based on caste – has become the rule? How is it that what were enabling provisions have become mandatory minima? Where does the figure 50 per cent come from? How is it that in practice it is exceeded blatantly? Are the benefits not being hogged by a few, the better-off amont these castes? Has the “creamy layer” been actually hived off? How is it that what were begun as reservations at entry became reservations in promotions also? How did this become a right to accelerated promotions? How did that become a right “accelerated promotions with consequential senority”? How did that become a right to have the prescribed standards diluted – to the point of being waived althgether? Even in educational institutions. Is this any way to become a “knowledge super-power”? As thee has been no caste-wise enumeration and tabulation since the 1931 Census, where does this mythical figure – “OBC’s are 52 per cent of the population” come from? And what did the 1931 Census itself say about its caste-wise figures? How have the Courts come to acquiesce in such wholesale perversion of the Constitution? Is their role to cheer such perversion on? Or is it to conserve, to protect the Constitution?
* T he above is an excerpt of the book which is freely available on the internet

It as been a long wait for me, but tomorrow is the day when I will have a chance to be face to face with Mr. Arun Shourie, a men of guts and rational. Knowing a person who has an entry by his name in the Wikipedia (Click here to view). All this in our very own SIBM, being done by a student body of the college, That’s what we call student driven…Kudos CIT!!!! An idea which will last a lifetime.

The Tipping Point: How Little Things can make a big difference

I completed tipping point yesterday night and I must say it is a fascinating experience to read this book. It talks about the epidemics, in general the mechanism by which a normal situation turn into epidemic. It talks about how very small things add together creating such a huge difference. Malcom Gladwell describes tipping point as the magical moment when an idea, trend or social behaviour crosses a threshold, tips and spreads like an epidemic. He says that there are three important laws which make an idea tip. The first one he calls as the law of few, in which he describes how important are the people who are part to spread the idea. He says that for an idea to spread it should be passed through some special kind of person in the society called connectors, mavens and salesman. These are the people with wide and influencing social contact. These are either people with large sphere of acquaintances and friends, those who are respected for their and the general people prefer following their opinions. The second law he calls as stickiness factor. The stickiness is the concept that if an idea is heard by a person then he or she should be able to remember it.. He talks about some TV show designed for kids called sesame street which tipped because its content stuck to the kids. Then finally he acknowledges the power of context where he says that the situation of the passing of the idea is also very important. He talks about the normal human attitude of attributing the characteristics as a whole without considering the situations. For ex we say a person X is honest, we mean that he is honest with friends, family etc. It’s not necessary that he will be honest at work too. Then he talks about the group dynamics and the magical number 150. He talks about the fact that in any group if there are more that 150 people then they all won’t be knowing each other individually. That’s the capacity limit of the human brain, and he explains how this is being used in business for competitive advantage. Then finally with the help of two case studies he concludes that for an idea to tip and to become an epidemic it’s required that all the small things discussed are the ones which make a major impact.
Overall the book was a very good read. Though it became a bit boring and monotonous at some instances but things were well explained. There were a few problems specially for an Indian like me to relate to the concepts which were duly explained with the help of the US TV show which is difficult to relate to any example in India. But the essence was clear. The cruise through the 259 pages of the book was really a very enriching experience. Adieu.